I completed 36 marathons and I couldn’t even run once

She was born thirty years ago in Vršac as the largest baby in the maternity ward. She had been overweight since early childhood, which caused insecurity, lack of confidence and the conviction that she could do nothing to change it. While she knew somewhere deep inside that she could use her inner strength to move mountains, when she was at college she weighed 100kg – a personal record. Despite her weight and the excessive amounts of chocolate she used to eat, she was valedictorian at the Faculty of Sport and Physical Education in Novi Sad.
This girl is a living proof that we can push our own boundaries. Once barely able to run, she is now a veteran marathon runner who proudly displays an array of medals. The first marathon Samantha Gilice ever ran took place on October 14th, 2012. She was walking around Novi Sad when, by chance, she noticed an ad for the marathon, and found herself at the start line within three days. 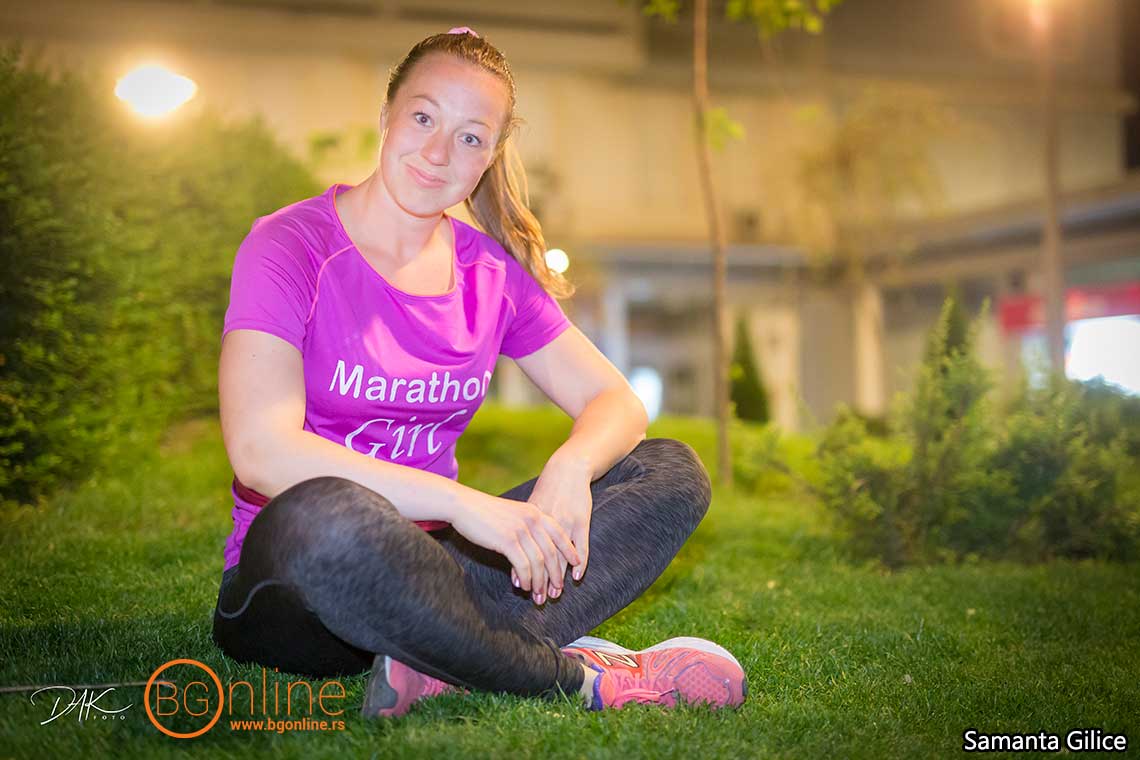 -It was Friday when I decided that I would run the following Sunday and I was certain that I’d finish with no preparation whatsoever. – Samantha recalls, – At that time I had just begun to work on losing weight, and I promised myself that I would run that marathon even if it were the last thing I did. I came in third and that day was a turning point for me.

Life before and after the marathon

When asked how she dared set such a high goal, even more so as at the time she couldn’t even pass some of the running requirements at her college (nothing she didn’t make up for in theory part of those exams), Samantha replies with a smile that she simply felt like she was destined to aim higher and that small victories came with rather low sense of achievement..
-The more weight I was losing, the more running I was doing, but even that proved far from enough for a demanding discipline such as a marathon. That first marathon helped me prove myself and others that I was capable of achieving something. Moreover, I’ve divided my life into a time before and a time after the marathon. I realized that there was nothing in this world I couldn’t do if I set my mind to it, and that every goal can be reached in at least 1001 ways. We can always find the right path if we’re determined. That is when I also grew to love myself more.
Only 20 women in Serbia finished that year’s 42km marathon, and Samantha started recognizing her own worth.
-The minute I got on the stand to receive my third place medal, I started feeling I was truly worth something. Before that, I fell prey to other people’s beliefs on my physical appearance.
Samantha now thinks she knows the reason of her seemingly effortless weight gain: it happened every time she was afraid, frustrated or insecure.
-When I moved from Vršac to Novi Sad and started college, I used to binge-eat chocolate before every difficult exam. My addiction was so severe that at times I ate as much as 1kg of chocolate per day. There was no time or way for me to spend all those calories, and it would worsen over periods of fear and self-doubt. I suppressed negative emotions through comfort food, and I lacked support and drive. I was a valedictorian, but I didn’t trust myself and often feared if I’d make it in life at all.

Losing weight is in the mind

Samantha doesn’t deny that the main reason for her choice of college was hope that she would lose excess and maintain normal weight.
-In my first year, however, I gained even more weight, despite exercising for 6 hours each day. I would blow my student grant on chocolate.
As the As in her student booklet piled, so did her weight, as a sort of armor.
-I lived in constant state of stress always expecting the most of myself. I couldn’t lose weight until I realized that it had to come from my mind and love of self. When we work to remove other obstacles in life, the extra weight just melts away. – says Samantha, – It’s as if I was freed of all other problems when I dropped those pounds , as if it was all smothering me. Now I am finally free and I do not care about what others say or how they look at me.
Many women perpetuate misery in a never-ending cycle of regimens. As someone who weighed 100 kilos, but is now a marathon runner and as fit as they come, she has a message for them:
-The first thing they have to do is face themselves, find the source of their discontent and focus on that first. In my case, the biggest problems were fear and lack of financial stability. When I started getting fitter, I changed my diet, and I’ve been eating more healthily ever since. I’ve cured myself of my junk food addiction by listing benefits of giving it up. I still keep that list on my fridge and cabinet, in which I keep sweets I still love. 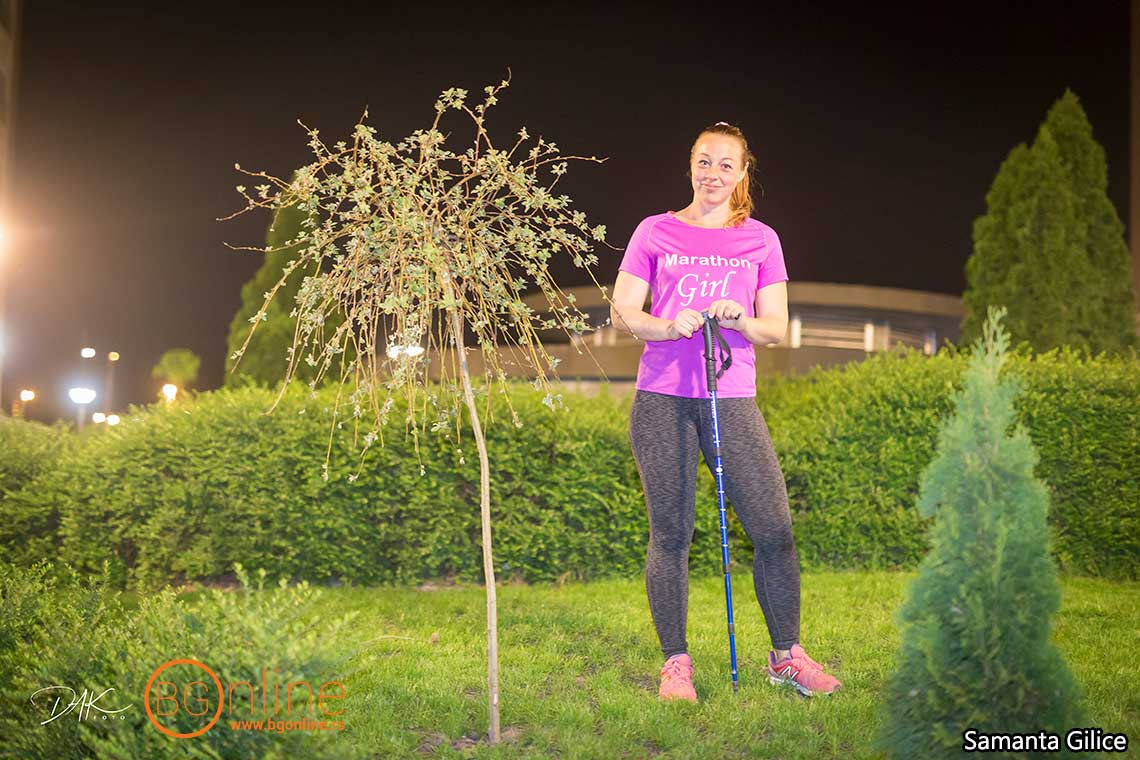 I have chosen life over 100g of chocolate

Looking back on her overweight life, Samantha says that she feels like she’s missed a lot of happy moments, having been too busy hiding.
-I choose life over 100g of chocolate. “Miles of Happiness” is a book about my experience with marathons and about how marathons actually happen in the mind.
Samanta has won 12 medals (2 gold, 5 silver and 5 bronze medals) from 36 completed marathons. At the 107km long Fruska Gora Marathon in 2016 she came second and third in 2018, and she has also won several medals in shorter races. She can complete 107-kilometer track in around 25 hours and says that this is a time for herself, and that nothing but her feet and magical nature exists for her while running.
-To me, it’s 25 hours of meditation and bliss, overcoming fear running through the woods in the middle of the night, 25 life-changing hours. Completing this run in 2013. was the thing that changed me the most. After that, I find impossible. Before each run I make a list of positive and motivational things to think about, because I am well aware of the impact of positive and negative thinking on us. I also think about how I’ll feel at the finish line with a medal around my neck and how I’ll share my joy with my friends and family. That’s what keeps me going to the end.

“Miles of Happiness” is not just a book about running marathons, but also about pushing oneself beyond personal limits. Soon, Samantha will publish another book, one about losing weight through mental strength.
-It’s about losing the spiritual ballast, about how to beat your brain and heart. – Samantha reveals. She’s living in Sweden and working as a personal assistant. She has no desire to look for the job she studied for, emphasizing that she had always seen herself as someone with less common plans and a more casual lifestyle.
One of the reviewers of “Miles of Happiness” was Ana Bučević, whose seminar Samantha attended in Belgrade once.
-I have been one of the first subscribers on Ana’s YouTube channel and a big fan. I got in touch with her and I can safely say that the marathon and Ana changed my life. Her videos shone a light on what was hidden under many layers, and to this day I have her support. She believes in me, and that means a lot. – says Samantha.
Affirmations have also helped this energetic girl find motivation. One of her personal favorites is: “I can’t be doing my best if no one’s noticing it.”
-I had been losing weight many times in many ways, but it didn’t stop returning until I found the root of the problem – the mind and self-esteem. Now that I’ve dropped to my high school weight, I’m maintaining it and writing a book about that – how to reach and, more importantly, maintain your ideal weight through mental exercise, where to start, how to find the root of the problem and remove it for good. So far, the only advice has been to work out and watch your diet. I know now that being overweight is nothing but a result of unresolved mental issues. I want to focus on the cause of the problem.

On the path of self-improvement, Samantha has had support, but she also encountered people who don’t understand her journey to this day.
-People who didn’t support me back then don’t support me now, even though they sometimes like to take credit for my success. However, their disapproval is what has eventually made me stronger, and I learned to function well on my own. I have no time for other people’s opinions. My dreams are waiting for me. The best thing that has happened to me so far is having become a competitive marathon runner. Other important moments include meeting Ana Bučević in 2013, as well as writing and publishing my first book, “Miles of Happiness”. Looking back now, I have realized that all the bad moments served a purpose and led to something positive. But, if I had to pinpoint what was personally the hardest for me, I’d say that was being bullied and ostracized by classmates, even some teachers and professors, because of my weight. The bravest thing I’ve done so far was to take control of my life.